About | Characters | The author

I. About the strip

Snail Dust follows the exploits of several young adults, their families, their friends, and the voices in their heads. The author sucks at characterization, and still isn't sure exactly what she WANTS to be doing with this thing, but who knows what the future holds in the way of new scripting and character development? (Adee do...)

A lot of what Snail Dust is relies on in-jokes, and so it may make a notable lack of sense at times. It is posted publicly nonetheless for those few who do identify with it; I apologize to those who read, then go away scratching their heads in confusion over what they have seen. Might I suggest a strip somewhat more geared towards the masses?


III. The author and the making of the strip 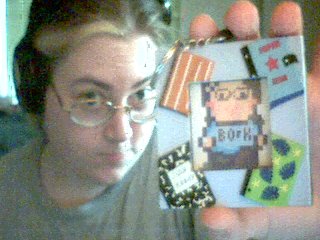 ) am Jenny Rowland (often referred to as 'Napoleon'), and I'll be your comic strip creator today. If you don't feel like reading about me here, I'll give you the gist of it: I'm a college sophomore who likes frolicking merrily, both on the internet and in real life. One of the ways I frolic merrily is by drawing these strips. I hope to keep them going for a long while yet, but I make no guarantees. Especially what with all the madness that insists on cropping up in my life.

If you're curious as to how I draw these things (a few people have asked), I shall explain it here.  It's gotten pretty lengthy and confusing to describe, though.

I work in a Strathmore sketchbook, lightly textured.  Drawing utensils and sundry accessories have come and gone, but I've never done a strip on anything else (except for the art bits from the first few weeks, which were before I got my mom to buy me a sketchbook that hadn't been salvaged from the art class I used to aide for).  I draw the art for the strip with a Sanford Turquoise B pencil, without bothering to maintain anything like a strip format, since it's just too hard and that's what copy/paste is for.  Then once I'm done pencilling I ink on tracing paper (a method I was too stupid to use till Barry Smith clued me in by his example) with a finepoint Sharpie. I scan at about 200dpi, open the results in Paint Shop Pro, edit each panel so my inking mistakes are less visible, then copy/paste them into a strip-shaped dealie, resizing when needed.  After I have everything the right relative size, I can do any coloring or pasting in of textures.  Once the fill stage is done, I resize the image, text on a new layer, add speech bubble things on another new layer, move everything around so it's good, and merge the layers.  Final step in Paint Shop Pro is to add the panel borders.  Then I save the image, open it in a dinky little program called PhotoStudio, paste it onto a slightly bigger image with room for the copyright and such at bottom, add said copyright and such, save, and I'm done.  The finished comic is exported as a gif in PSP and uploaded.